We have shown sheep at the Great Yorkshire show, Westmorland, the RBST annual show and sale, the Society show and sale at Skipton and various shows in the North of England. 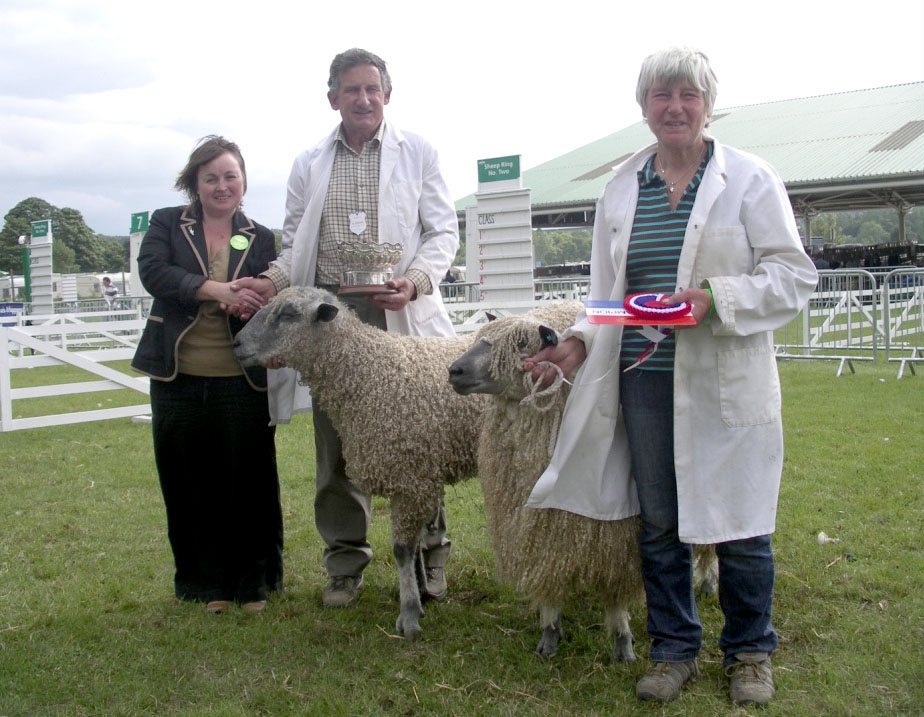 Over the years we have had breed champions, longwool champions and best black sheep at the RBST show. In 2011, at the Great Yorkshire Show we had both male and female champions (which is a comfortable feeling when you are waiting for the judge for the overall winner!) . The ewe, a hogg in wool, went on to win the Longwool championship. The sheep we enjoyed most, however, was a ram called Border Reiver. He won at Yorkshire in 2007 as a shearling and again in 2010 as a 4-shear, both times Longwool Champion.

Unfortunately, in the intervening years, first foot and mouth and then, bluetongue, prevented showing him. He won wherever he went and stood stock still and perfect without any prodding or poking in the show ring. Just as well, because if he didn’t want to move there was no pushing him. He was too heavy. Getting into the trailer after the show was a challenge! We often do well with our ‘Hoggs in Wool’ where a yearling ewe is shown in its full fleece before she is clipped for the first time. They enter the ‘wool on the hoof’ competition at Yorkshire as well in which we have had reserves but never the Champion.

A hogg in wool takes a lot of preparation and you need the right fleece which separates easily, but whenever a Wensleydale takes the overall championship (or reserve) at a show, it is invariably a Hogg in Wool. They look impressive, they symbolise the breed and they showcase the magnificent fleece We also show the clipped fleeces in fleece competitions and have had overall champion and reserves. Last year we were pleased to get the reserve overall champion fleece at Yorkshire, and the year before that a black fleece won a special for best the best coloured fleece at the show.

Showing black sheep is very limited, but opportunities are beginning to increase. RBST shows allow black to be shown against whites and now Skipton show and sale has opened its doors to black wensleydales.

Every year we go to Masham, where we show whites on Saturday and blacks in the ’any other breed’ class, where they do well.

Last year Yorkshire opened its ‘wool on the hoof' class to all comers and we entered a black hogg in wool. She came third in its class. This was very pleasing since we had spent every evening at the show picking straw out of her fleece - as either black fleece holds straw more or it just shows up more..