The Wensleydale is an old English breed of longwool sheep from the Yorkshire Dales, renowned for its stature, lean meat and superb fleece.

It is distinctive-tall, long bodied, deep chested, with an alert head, clean face and dark skin. It is probably the heaviest of our indigenous breeds.

Its magnificent long, lustrous, curling fleece is reputedly ‘the finest longwool in the world'.

Testing has shown the Wensleydale to have the highest scrapie resistance of all sheep in Britain. This, together with its size and fleece, gives good reason to use it as a crossing sire on hill breeds.

The female progeny have improved fleece and scrapie resistance which when put to a terminal sire, give heavy but lean lambs. Traditionally the Wensleydale is put to a Swaledale to yield a Masham ewe.

A Brief History of the Wensleydale

1838 A certain Richard Outhaite Esq. of East Appleton, near Bedale, North Yorkshire, hired for 40 guineas, a well known Dishley Leicester ram from a Mr Sonley of Lund Court, Kirby Moorside. He used the ram on his Muggs, the local longwool breed (Muggs, now extinct, were a spotted faced sheep not unlike the present day Teeswater)

1839 Amongst his crop of lambs, was an outstanding animal, known as Bluecap, who grew to be the finest ram in the North of England at that time. Weighing 32 stones (over 200kg) as a 2-shear, he was wild and active (not easily handled!). He had a very dark blue face and black skin covered in fine white lustrous wool. He was widely used and consistently gave lambs similar to himself. 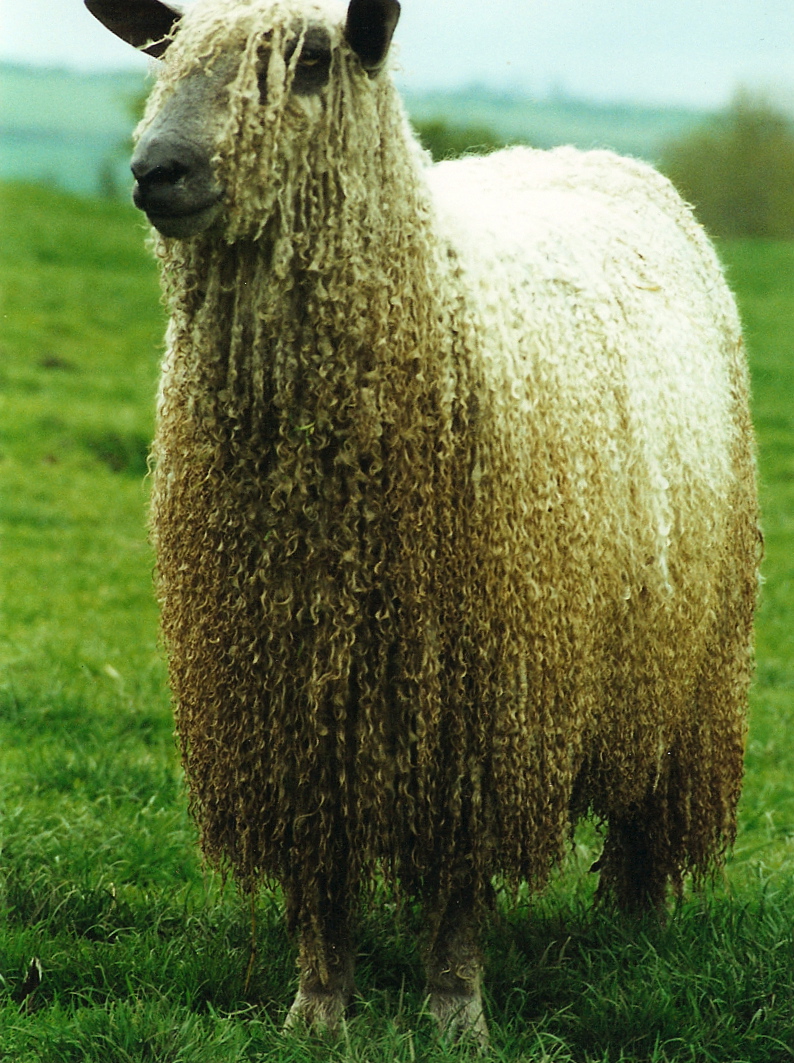 1876 The name Wensleydale was adopted for a new breed. These were the descendants of Bluecap who had continued to breed true to type, very distinct from other longwool breeds having clean blue faces and skin and the finest of fleeces.

1920 Tthe Wensleydale was the leading crossing sire in the country. The Wensleydale Longwool Sheep Breeders Association had 197members and 3,059 ewes were put to the ram.

1967 The popularity of the breed had declined so badly that there were only 18 registered flocks and 291 ewes (100 of which were in one flock) were put to the ram.

1973 With the formation of the Rare Breeds Survival Trust, the breed was put on the critical list.

Since then a new interest in the breed has gathered momentum.

1988 Classes were introduced at the Royal Show and in 1995 a Wensleydale ‘Hogg in Wool’ bred by by Mr BR Field was the Reserve Supreme Champion at that show. More recently in 2014 Mr E Sherwin repeated that sucess also with a Hogg in Wool, at the Great Yorkshire Show.

1999 A record price of 1220 guineas was paid for a shearling ewe at the Association’s Show and Sale at Skipton Auction Mart. Wensleydale wool was the highest priced in the Wool Board list. Wensleydale sheep were exported to the continent; and semen to the USA.....

2019 Interest in the Wensleydale as a wool producer has soared. Both white and coloured wool is in great demand from spinners, knitters, dyers, weavers, felters and other handicrafters who are looking for a strong long staple with crimp and lustre. With this demand, the price of wool has risen considerably especially through private sales, mirrored by the woolboard price for our wool being the highest quoted for any breed of sheep. It is now a good economic reason to keep a Wensleydale flock.